The quiet, foggy streets of Richmond—the southern end, just before you cross the river, where Church street gives way to Chapel. On the radio, the early ABC news, which I listen to as I run, using my new bluetooth headphones. A pandemic present to myself. I am not one of the hordes who discovered running, suddenly and simultaneously, at the onset of Lockdown 1.0, finding in pavement-pounding a form of backhanded (or flat-footed) rebellion against the government’s stay-at-home orders. (‘What are you doing?’ demands a billboard at the formerly roaring juncture of Punt Road and Olympic Boulevard. ‘Go home.’) Four reasons to leave home, and exercise is one of them. So there. ‘The government begged us to do 30 minutes daily exercise,’ says Ricky Gervais in an interview I saw with him the other day, ‘and we wouldn’t do it. As soon as they ask us to stay home—suddenly, everyone’s a runner. I yell out my window at these people, “Where have you been?”’

It really is quite foggy. Nothing like the sunny winter mornings of Tassie.

Ricky, of course, was speaking from the UK, site of half-arsed, will-we-or-won’t-we lockdowns, the sort you see in countries grappling with—well, yes, incompetence no doubt, but also their legacy of individual liberty weighed heavily against collective interest. In this regard, I identify not as a far-flung realm of empire, but as an Asia-adjacent nation. Remember the teams of white-smocked people spraying the streets of Wuhan with what I assumed was disinfectant? (Did I really see, or only picture that?) We have our own teams now, around Richmond, and I assume elsewhere in the city. They’re strangely friendly. Almost like they’ve been trained to disarm the threat they might pose to a nation considering erring more on the side of the free-range viral terror you see in places like America.

Of course, smart, clean Australia, so organised, so respectful of ‘the science’ and of the people in charge, is being let down a little by my town. On Friday, metro Melbourne and the Mitchell Shire recorded the highest daily infection rate anywhere in Australia since the pandemic began. The daily build-up to the 11am press conference makes me a little queasy, although the worst news tends to come at 3. In the mornings I refresh my feed (The Age, The Guardian, Australian) like religious observance. Not sure what I’m looking for. Here it comes: proof this latest Sydney outbreak (#crossroads) is our fault, too. I knew it was coming, better to get it over with.

And on the radio, right now as I run:

No one calls it the ‘Peter MacCallum Cancer Centre’. It’s like someone in Hobart saying ‘Mount Wellington’ instead of just ‘the mountain’.1 Well, not quite as bad as that; but from the same family of out-of-towner error, a sign that you don’t belong.

The thought drags into consciousness a clearer sense of something that’s been forming, I think, in concert with this second wave; since we first began to realise that ‘hotel quarantine’ wasn’t quite the safeguard (so to speak) against a resurgence of infection that we all thought it to be. (Virginia Trioli: ‘I sure hope those security guards had their fun, because they utterly fucked us too.’) I realise, as I round the river, that I feel grim pride in Melbourne. ‘Grim’ barely covers it. Grotesque, perverse; my shame, as the thought forms: of course we’ve been beset by virus. That’s what happens in real cities.

Back in March, on another run, I crossed the river at Punt Road and listened to an interview with some really silly girls, Australians living in New York, refusing to come home regardless of their parents’ pleas. Ambulances were literally wailing in the background. ‘We’re here for better or worse,’ they told the anchor. ‘You don’t just pack up and leave at the first sign of trouble.’ Idiots. This isn’t a game, there are people dying. And now that’s me, some silly girl masquerading as a grown woman. I, too, am stubbornly staying put. True, I couldn’t leave even if I wanted to. And—cringe on cringe—Melbourne is not Manhattan, despite our yellow cabs and our pretension; we’re not even close to the cultural gravitas, nor the death rate, and the viral spread. And yet, here I am, with my strange and shameful pride.

‘Here’. For a long time, since my Tasmanian exodus, I have been mentally ‘at home’ in Hobart still. I have often used the word ‘here’, when I really mean ‘there’, confusing my interlocutors. Well, I have finally, properly arrived in Melbourne. My former home is firmly closed. I more than acquiesce: I wholeheartedly agree. He, Gutwein, would be crazy to let the viral rabble in. But it also feels like I’ve finally found out who my real friends are: my fellow, dirty Melbournians. I was surprised by the anger I felt the other day when I listened to that Queensland premier discuss ‘taking’ the AFL from ‘us’. ‘We’re glad to help,’ she said. Sly smile. And the players. I don’t know their names, not even the famous ones. But where’s the fucking loyalty? This pandemic has necessitated the drawing and redrawing of group boundaries: Australia; not-China. America. Lombardy. The two dirty cities: Sydney and Melbourne. Then us on our own. The mainland. The North West of Tasmania. Burnie vs Devonport. Regional Victoria vs metro Melbourne. Border towns: Albury/Wodonga. ‘Let’s move the border south’ they’re saying on the Sunshine Coast as Sydney cases start cropping up again. ‘This isn’t State of Origin’ someone on a media podium said at some stage, accidentally activating a weird viral metaphor. Residents of the north-western suburbs of Melbourne, against us others, south-easteners. Those who do, and do not, reside in high-rise, social-housing towers. (The aged care residents, by contrast, belong to no one, and us all.) And so it goes on, until you get to the fundamental unit of the family. But does it really stop there? Sometimes it’s a ‘family’ of one. Or families spread between separated parents. My own step son, Yr. 12, comes home a little shell shocked from a week of big-kids-only on-site schooling. ‘No one knows what to do,’ he says, meaning: can I play basketball at lunchtime, and act like things are normal? I don’t know. My point is that the footy teams chose ‘the Tigers’ or ‘the Hawks’ or whatever as their fundamental unit, not our city or our state. That’s fine. Fuck them. They’re out. ‘Enjoy God’s country’ said that Qld premier, ‘you might never want to leave’.

And yes I’m aware this is completely mental, not in the slightest bit fair. You’ll have to forgive me. It’s the pandemic. And I know I’m being dramatic: not everyone is quite as Melbourne-burning focused as I am. The other day I received an invitation to an engagement party in Tassie for a fortnight's time. I wrote to the couple some lame joke about ‘Peter Gutwein making an exception for me’ and asked them what they would like me to send them as a gift. ‘The only present we want is your presence,’ came the reply, ‘but we understand if you can’t make it.’ I think I’ll send a voucher for Fantastic Furniture.

Meanwhile, after my run, I will wrangle my kid for some home-learning, and I’ll do some work, then we’ll head out in the high-noon winter sun (fingers crossed) to the deserted MCG. We’ve been flocking here, round (lockdown) #2, for a few reasons: it’s good scootin’ country; the concrete is a suntrap; you can sit on the steps without getting your bum wet—picnic rugs tip you over the line, I think, into unacceptable not-at-home behaviour, even if you are only with your only son, as I often am. We come here, most of all, to avoid the grassy places we might run into his school friends. Telling him he can’t play with them hurts too much. Hurts me, that is. He has been remarkably accepting (given that he’s all of six) of repeated assaults on his liberty; his loss unchecked by a compensating sense of fulfilled altruistic duty. I assume, that is, that he’s too young to really understand ‘my actions impact others’. But then again, I also thought he’d be too young to know what was needed of him in a pandemic. ‘Kids are fine’ he says, checking my face for signs of consternation. And oh, what this burning scene would look like, if it were our kids burning, too.

I called the MCG ‘deserted’ and that’s not true. There are people dotted here and there, those like us, no doubt: gardenless apartment-dwellers, surrendering space for the chance to live in this great city, a lifestyle dependent on never being at home, but always at the park, the library, the cafe. I want to call this city ‘great,’ and you can’t stop me, not now, when we are all here, burning.

At the G, there are people hitting tennis balls against the concrete walls; kids on scooters (not ones we know, we’re at the other end of the suburb from our school) and a young, nascent couple ‘exercising’ (kissing passionately, the forced separation no doubt a profound aphrodisiac, like the pandemic runners lusting for their exercise.) I’m starting to recognise my fellow MCG parishioners. We call out greetings across the empty space that stretches safely in between us, a fresh breeze (four seasons in one day) dispersing, I do hope, any lurking viral load.

When the museum reopens (date still, as yet, TBC) we aim to show Arthur Boyd’s Melbourne Burning, and many other works, as part of a rehang. 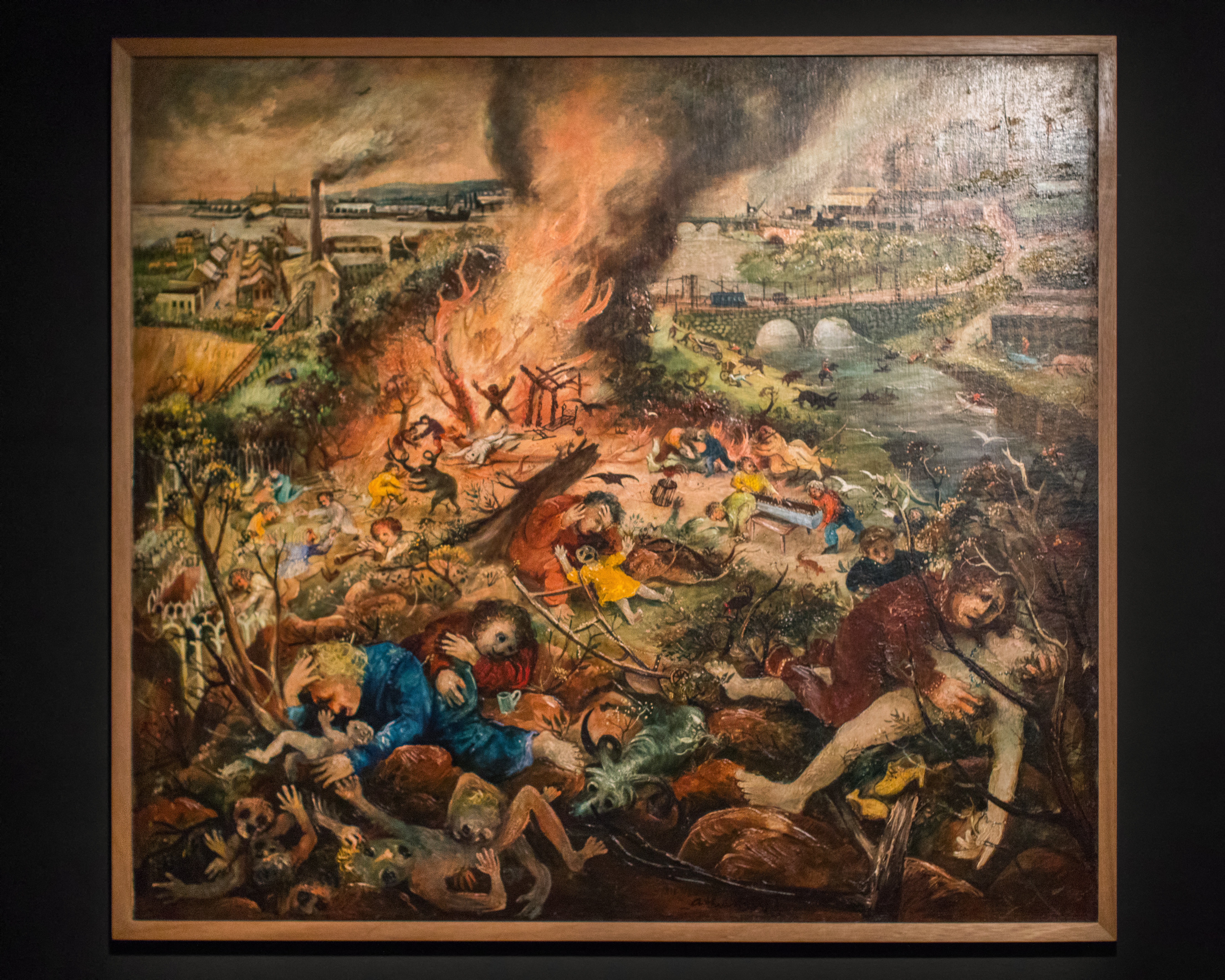 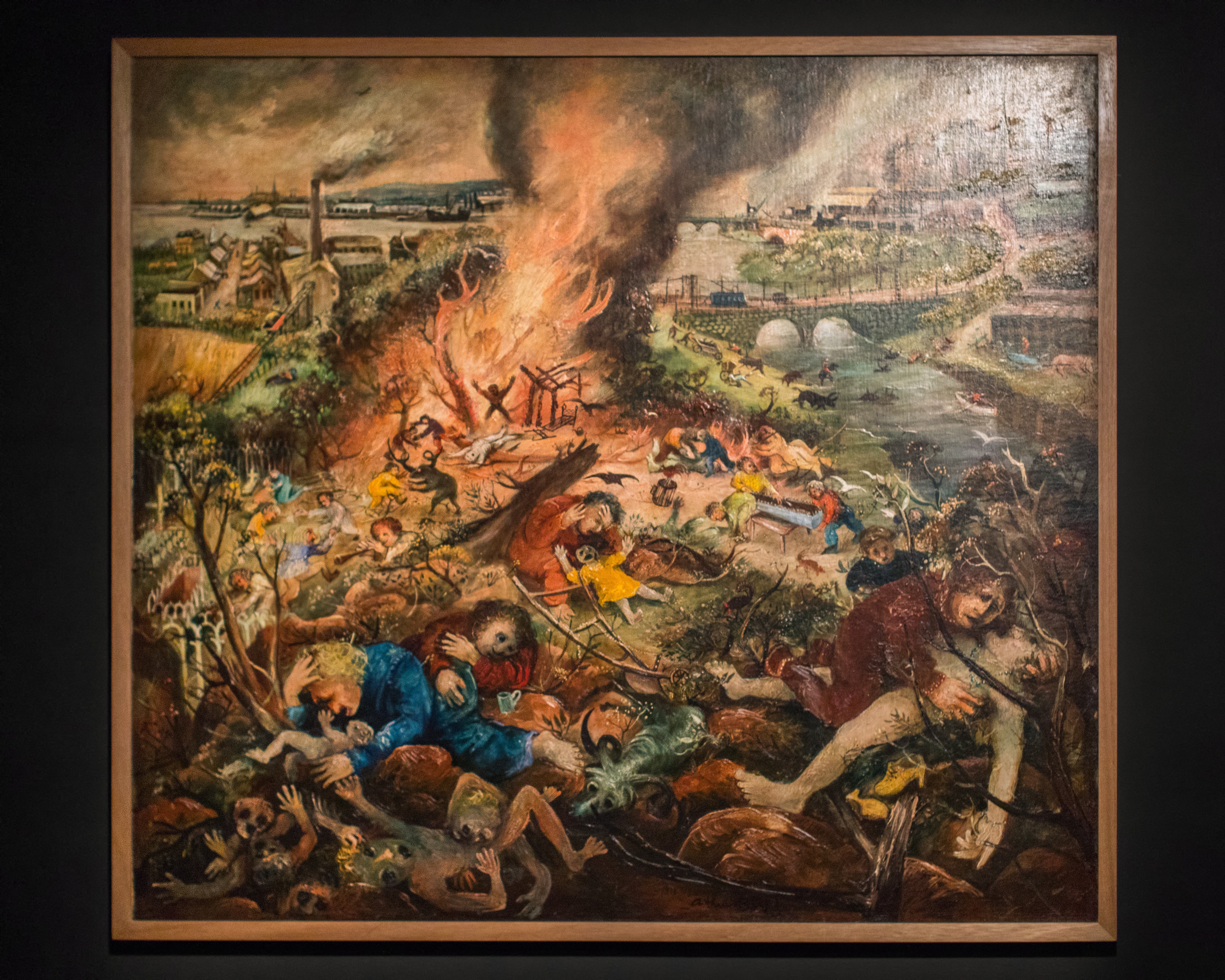 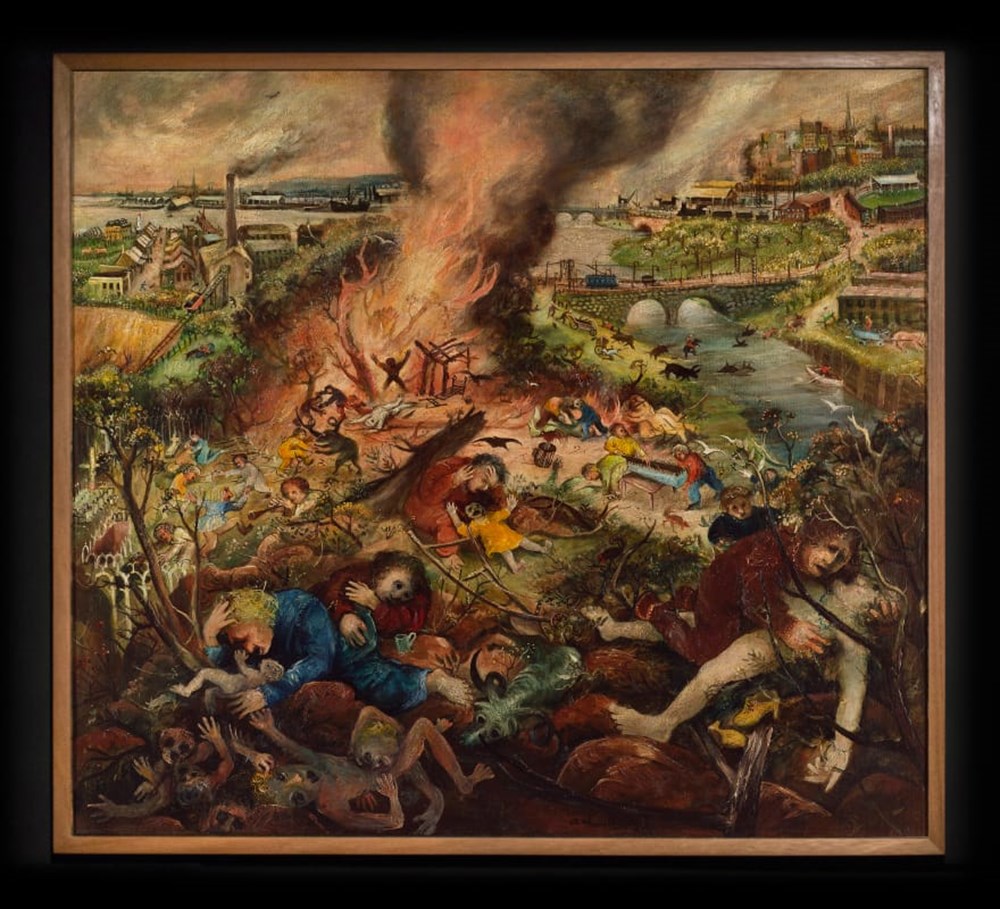 1Now I’m showing how out of touch I am: the mountain is more commonly referred to now as kunanyi.